This coming Sunday marks every American’s least favorite part of Daylight Savings Time—waking up and discovering we were robbed of an entire hour of sleep, and then spending the remainder of the week trying to convince ourselves that 7 o’clock is the new 6 o’clock. 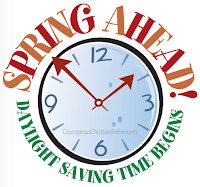 Daylight Savings fascinates me. It makes the universal constant of time feel completely arbitrary, as if resetting clocks across the nation grants us the power to bend the arrow of time itself.

That’s not the way it works, of course. We set the clocks forward in the spring, but we can’t just keep pretending to fast-forward through time. The clocks go back an hour in the fall because we understand that Daylight Savings has no impact on the actual flow of time. Turning our clocks forward or backward doesn’t stop time from marching forward, completely indifferent to us and our customs.

Studies have made conflicting claims over the years about the benefits and drawbacks of DST. Those in favor say that it saves energy, promotes outdoor leisure activities in the evening, and provides more time for shopping. Yay for more daylight to cook out, play a round of golf after work, and go fishing. Others have said that since most mischief happens in the dark, the extra daylight cuts down on crime.

However, the cost benefit for electric usage is negligible if you compute the cost of turning on lights for longer periods of time in the mornings while it’s still dark, and using them less in the evenings because it’s light. After all, most of our big-ticket home electrical systems run constantly, and don’t give a rip what time it is.

On the other side of the issue are those who claim that DST costs as much as $40 billion in what it takes to adjust clocks, computers, and even the stock exchanges. Health officials have concluded that DST increases the risk of heart attacks by 10%, and changes in sleep have a direct correlation to poor work performance. Contrary to the popular opinion that DST was created for the benefit of farmers, they are some of the biggest opponents of it. The rationale is that grain is best harvested after dew evaporates, so when farmers or their help arrive at earlier hours and leave later it causes quality problems with the products, especially if you depend on someone with paid-by-the-hour drivers, harvesters, and trucks whose schedules have been rearranged by the time change. Dairy farmers also complain because their cows are finicky about the timing of milking which is dictated less by the sun as much as it is by when the dairy company sends their trucks.

So I am confused, since there are both benefits and disadvantages. In the discussion of pros or cons there is one thing that’s clear: Nobody is talking about the time change from a religious perspective.

II Peter 3:8 says, “With the Lord a day is like a thousand years, and a thousand years are like a day.” Psalm 39:4-5 and James 4:14 declare, in similar ways, that life is very fragile and transitory. “Our time on earth,” as one writer puts it, “barely registers on the eternal radar screen,” so we better use our time wisely. The Parable of the Talents in Matthew 25:14-30 tells us the same - to use our talents and time wisely! The bottom line is that we need to make the most of time and remember that there is a time for everything...

Or to paraphrase from the Byrds...

And on a "public service note"... while you are up changing the time on the clocks; it is still a good idea to also change your batteries in all your safety equipment such as smoke detectors, carbon monoxide detectors, weather radios, flashlights, etc.